This weekend we celebrated my brother’s birthday. I picked up my brother’s girlfriend on Thursday, and we picked up the bro on Friday. Brian joined us later in the day Friday. We had so much fun! We ate so much yummy food, which is always one indicator of a good time.

I spent a lot of time on the road this weekend with my brother and his gf. We sang along to Glee most of the time, which made it lots of fun. Don’t Stop Believin’ is still my fave, three CDs later.

On Saturday the four of us went apple picking. It was so pretty! I came away with three apples and a dozen apple cider donuts. Typical. 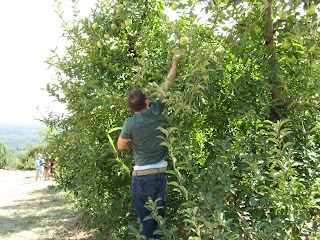 {obviously the bro had to turn apple picking into some sort of physical competition. In this case, jumping for a high-up apple}

Brian went home yesterday afternoon, so the three of us got pizza and wings and watched Ratatouille. I love that movie. As a self-proclaimed foodie, it’s pretty awesome to see a Disney Pixar movie all about people who love food.

Speaking of food, last week I made Taco Pasta. It was delicious! I highly recommend it. I will definitely be making cheese sauce from the recipe again and trying new ways to eat it. I’m thinking pasta with broccoli and cheese? Yum!

I’m watching Say Yes to the Dress with my roommate for the first time. I’m not sure that I’m sold yet. It’s definitely interesting to see what people pick. I definitely like the end best where you see them get married!

Happy Monday! Have a good start to your week!

« Technical Difficulties
You want me to eat… what? »