So… I’ve had a string of pretty awesome weekends. Senior year of college is pretty awesome. The real world next year is going to have some pretty big shoes to fill.
Thursday and Friday were spent going out with my friends at school and generally enjoying my cushy college life, AKA enjoying not having classes on Friday.
I went to Brian’s on Saturday. We were supposed togo to a pig roast for law students. It was out in the country somewhere, and required a shuttle to get there. The shuttle only held 24 people. The first time the shuttle came we didn’t get on, along with about 10 other people. Over the course of the next 45 minutes, a lot more people came to wait. It became apparent that we weren’t going to make the next shuttle unless we pushed our way to the front. Brian and I aren’t big pushers. By then it was about 3:00 and all I had eaten all day was a bowl of cereal and a muffin top thing (Seriously. It was just like the Seinfeld episode.) Needless to say I was not at maximum happiness. We decided to call it quits and head home.
By the time we got home it was well after 3:00, and we decided to be warriors and wait until dinner to eat. We went out to dinner promptly at 5. I wanted a steak and cheese. The restaurant served sub in 9″ and 18″. I have never heard of this before. Of course I ignored the fact that we would be eating an INSANE amount of sub, and insisted that we order onion rings as well. Brian continued to order a slice of pizza, which I obviously had a bite of. I wish this was super unusual for us, but alas, it is not. I scarfed all of my food happily. Then we went on a walk, and then we got icecream. I got the oreo cookie, in case you were wondering. I know, we’re really smart.
At this point, I’m in a state of severe food coma. I say that I have a food coma a lot, but I’m lying. This one was for real. I literally passed out. Brian turned on video games. I laid down, the only position where I could be at all comfortable, and zonked out for a good forty minutes until Brian
accidentally dropped a pillow on my head (I know. It seemed questionable as I typed it. It was probably intentional.)
Anyhoo, after I woke up, we proceeded to go out and have a really fun time with Brian’s new law school friends. We were even feeling good enough to take this Myspace-style pic. 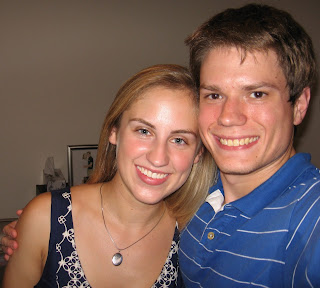 {“Yes, we did just eat enough calories to feed a small village.”}
I even digested enough later in the evening to order some late-night cheese fries at the bar. And have a strange dude unsubtly eat some of said cheese fries. But that is another story.
This morning I got up, drove home, and went with my ARCH class to Monticello. It was such a beautiful day for it. The only other time I had been was in December, and while I ultimately loved it and the view on that crisp and clear winter morning, the gardens are a kajillion times better in September. 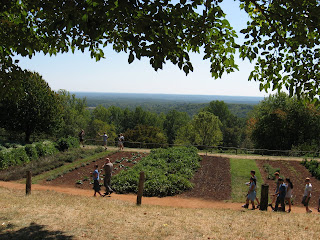 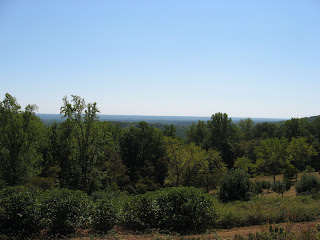 {I can’t get over this view} 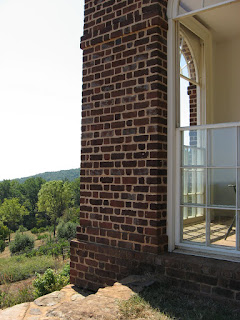 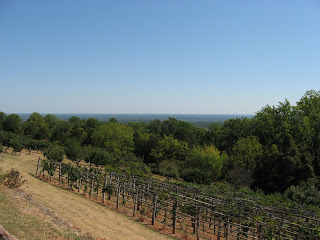 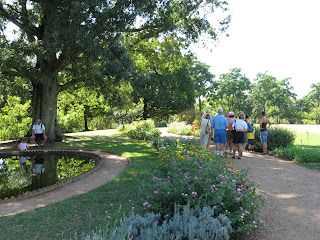 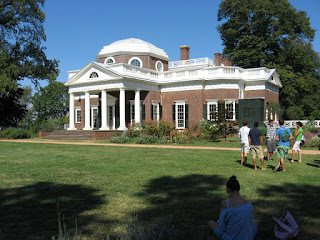 It was an absolutely beautiful end-of-summer day.
Have a good start to your week!
« Wedding Wednesday: Decisions
Random thoughts.. i.e. Typical Blog post by Kate »