Hi friends! This week has gone by so fast. Tomorrow I’m heading to my friend’s place for some quality time with the MOH. I’ve never been, so I’m realll excited!
I don’t really have anything super interesting to say, so I’m going to tell this random story. Well, it probably doesn’t qualify as a story. Whatever.
The other night I was thinking about wedding stuff (what’s new) and I was thinking about painting pots or dishes or something for centerpieces. This reminded me of painting pottery when I was little. Do any of you remember when Michael’s used to be MJ Designs and they had that entire section of white ceramics that you glazed in the store and then they fired it for you? I remember there used to be singular stores that did that also.
If ever there was a craft that entertained child Kate, this was it. I thought that this was pretty much the coolest thing ever. I remember doing it a few times, but I don’t remember what happened to any of my stuff, or even what it looked like in the end. I was big into arts and crafts as a kid (not much has changed), so painting something that you could actually use was fascinating to me. 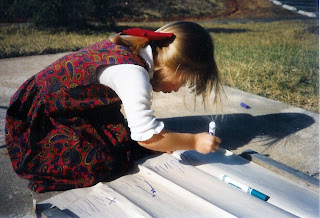 {Me getting my color on. Circa 1992.}
Was this just some fad that existed in the 90’s? And if so, CAN THEY BRING IT BACK? Because even though I said it was something adored by Child Kate, I still would think it was pretty awesome. Even if you are basically paying buku bucks for something that you have to do yourself and is typically ugly. I’m confident that I could paint something sorta pretty. Maybe.
« Commencement: Part 2
Randoms and a few Halloween links »