Before you think too much about my recent blog hiatus, let me start of by telling you that I’ve been under the weather. And on Thanksgiving! I know, you’re already feeling sorry for me. It started over the weekend before Thanksgiving, and between the sniffling and trying to get out of town, I wasn’t really in the mood. My apologies. I’ll start where I left off.
Last Thursday the penultimate Harry Potter film was released. No, I haven’t seen it yet*. But I did attend a party on Friday in honor of Harry Potter. I dressed as Fleur Delacour, and my entire costume came from Goodwill. 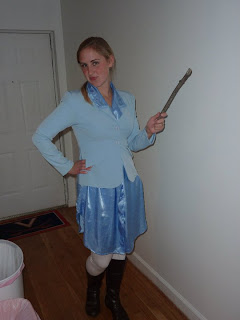 {I look snotty because it was easier than looking sexy, and I had to be in character, obviously. Basically I’m wearing a 3XL silky night shirt and a light blue blazer. It was a pretty lucky find.} 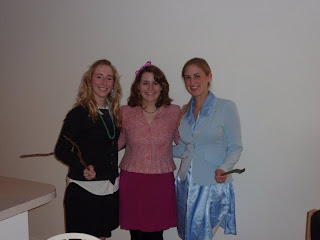 {My roommates went as Luna and Umbridge. Yay for homemade costumes!}
Tuesday night, I drove home with a lot of Graeter’s ice cream in my trunk. Twelve pints to be exact. My mom’s family is from Cincinnati and ice cream is very important to us. When my mom found out that Kroger now sells Graeter’s, I offered to smuggle some up for her and the rest of the fam. Aren’t I nice? My pint of chocolate chocolate chip was delicious.
Wednesday night we saw a movie (like we do every year). After the theater featuring Due Date was without heat, we settled for Love and Other Drugs. Don’t get me wrong, I wanted to see the movie. Just not with my whole family. In public. Awkward. 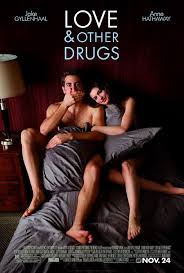 {I would just like to say that after watching this movie I thought it was funny that Anne Hathaway played Jake Gyllenhaal’s gay beard in Brokeback Mountain. What pops up when you Google Love and Other Drugs? Scenes from Brokeback.}
I basically giggled through all of the raunchy sex scenes, proving that I’m really not mature enough for the scenario that I just described. It didn’t help when my brother leaned over and whispered, “I love watching porn with Mom and Dad.” That didn’t help so much with the giggles.
I’m going to leave it there for now and start in on the Thanksgiving recap tomorrow. Buenas noches!
*I’m a really big Harry Potter fan. So much so that some of the inaccuracies of the movies bother me. The result is that I haven’t been the most loyal viewer of the HP movies. However, I do want to see this one. And in unrelated news, I’ve decided that after I finish the Hunger Games, a rereading HP is in order. Stat.
« Park Obsession
The Actual Recap of Thanksgiving 2010 »