I consider myself to be a major Gleek. I’ve been a fan since almost the very beginning. I will watch any episode many times. And I have to admit that oftentimes, even though I sometimes agree, it bothers me when other people criticize the show.
So I’m writing a post about what I think is wrong with Glee. I know what you’re thinking.
I don’t want to complain about the music. It’s not perfect, but I think their performances are consistently pretty good. My biggest beef with what has happened to Glee is the writing. The first half of the first season was, in my opinion, the show’s high point. During this time, the plot of each episode seemed consistently thought out, and there was a variety as to how they introduced the music into each episode. Since then, it feels like they have no idea what to write about. Did they think it wasn’t going to last or something? Plan ahead, people!
My biggest pet-peeve with the show is that they can’t seem to write for happy couples. If a couple is going out on the show and isn’t about to break up, they get no attention. As far as I’m concerned, this is the show’s greatest downfall. They couldn’t leave Schuester and Emma alone. Finn and Rachel broke up. It would be one thing if these relationships las
ted a while and then they broke up, but it’s like once they put them together they can’t wait to have them break up.
The problem with that is that then they have to find someone new for those characters to go out with. Of the original members of Glee, the combos in which they have had crushes, gone out with, or hooked up with each other is crazy. It’s like Friends except instead of 6 people there are 12, and instead of spreading it out over 10 seasons, the relationships are crunched into 2. I even made you a visual. 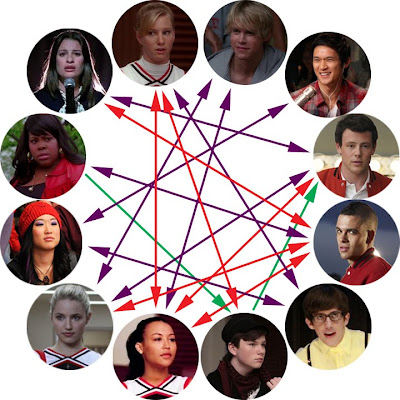 {Do you see all those arrows?! Can I get a dayummm?}
So what information can we glean from this diagram, other than the fact that Santana and Puck are the sluts of the group? That is a lot of Glee-cest, people. A lot. I’m all for drama, but this is just unreal. And you will notice that I left off some excess people, so this doesn’t even cover all the relationships. I know high school dating can be quick and fleeting, but seriously? I think the writers are talented enough to come up with some other plot drama than who is going out with who and why they are breaking up. And those are my two cents.
So here’s to hoping that tonight is the night that it will all turn around. It’s what I hope for every Tuesday.
« Short and Sweet from the Bed of the Crippled
Ape House: Chapter 26 – Epilogue »