When  I was taking the Blog Designer Network Course, our homework for the first week was to design mock-ups for two blogs.  Since it was hard for me to just make up a mock-up for any old blog, one of the ones I did was Be Wildflowers.  This is the blog of one of my bffs, Kasey (she was my MOH!)  She recently switched her blog from WordPress.com to Blogger so that I could install a new blog design for her!

When I finally showed Kasey the design a few weeks after I had made it, we laughed about how similar it was to her childhood room.  It wasn’t something I had done consciously, but the resemblance was kind of uncanny, down to the cross-hatch linen texture background that is not dissimilar from the paint texture on her walls.  After having learned a lot in the rest of the course after I made the initial design, I decided that it needed some tweaking.

I kept the same color scheme, but other than that most of the design changed.  I had been wanting to try a chevron pattern and I thought it would be a good fit for this blog.  I also wanted a more sophisticated header shape, and was pleased with how it turned out.

When I showed it to Kasey, she really liked it, but she wanted some more color and for me to try to emphasize the wild part of the title.  She also sent me some Jimi Hendrix posters as inspiration.

{The Jimi Hendrix posters are from here and here}
At this point I knew I needed to adjust my color scheme so that I could include some pops of color.  I discovered Design Seeds through Pinterest and found this color scheme that basically added some bright colors to my original color scheme.  I also played around with the header some, but Kasey and I decided that the version above was a little too childlike and that I should go back to the original fonts used in the second iteration.
I liked the idea of changing the color for the “wild,” but I felt like it needed some embelishment that said “wild.”  That’s when I realized that I needed to scrap the original clipart flower I had been using and illustrate one myself to have a more hippie feel to it.
I was really pleased with the final product.  This was the first blog that I designed for someone else to completion, and it felt good to be challenged to meet someone else’s needs and not just my own preferences. 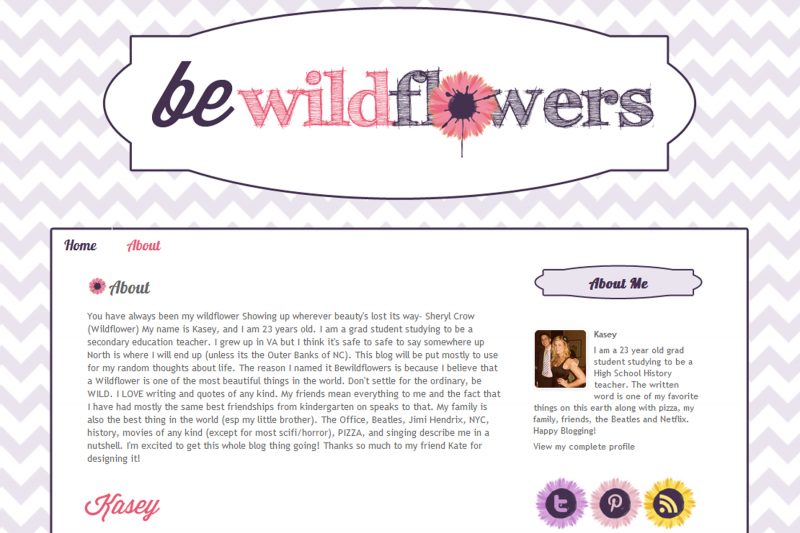 Don’t forget to check out Kasey’s new blog for yourself!
« Winner!
announcement and engagement photos! »