Brian and I made a pact to do our best to eat healthier between Thanksgiving and Christmas (although I must admit that my trip to Wal-Mart last night might have set us back a bit!)  I know I already said we were doing that, but to be honest, we fell off the bandwagon, for a number of reasons.  As you can see we’re not exactly nibbling on celery, but we have gone quite some time without cheesy pasta.
Chicken Sausage and Onions and Red Grape Salad 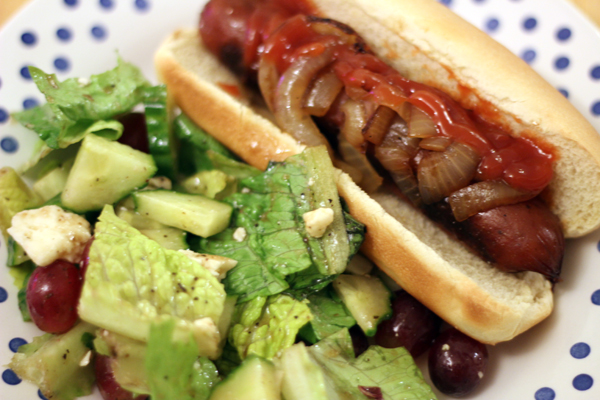 I have to give Brian all the credit for the sausages.  He sautees them in a cast iron skillet (but I think any skillet would do) with the onions.  Then we eat them on buns with ketchup (like brats!)  Well, that’s not true, Brian actually eats his with Miracle Whip, but I think that’s weird so I treat mine like brats.
The salad is a salad that is very common at my family’s house.  Our next door neighbors always used to make this, and we started making it too.  It’s just lettuce with red grapes, feta cheese, cucumber, and balsamic vinaigrette dressing.  We use Paul Newman Light Balsamic Vinaigrette, and I also bought reduced fat feta cheese, and you can’t taste the difference!
Baked Chicken, Red Potatoes, and Salad 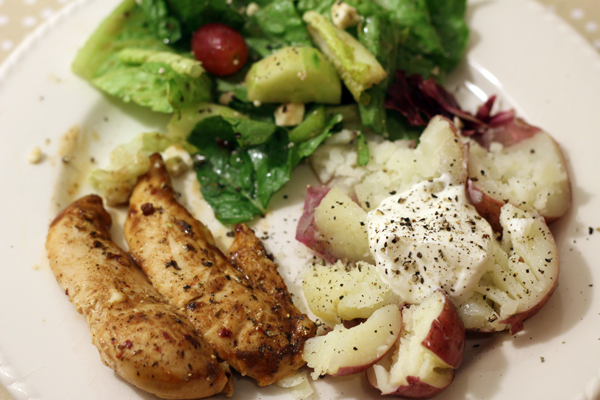 This is my mom’s go-to weight watchers meal (except they have a grill so they have grilled chicken- lucky!)  We just marinate the chicken in a store bought marinade (I think tonight was Ken’s Caribbean Jerk Chicken) and bake it or broil it (this chicken was baked).  Then you boil the potatoes for about 20 minutes, and I like mine with a dollop of light sour cream and lots of salt and pepper.  The salad is the same as above!
Chicken Taco Chili 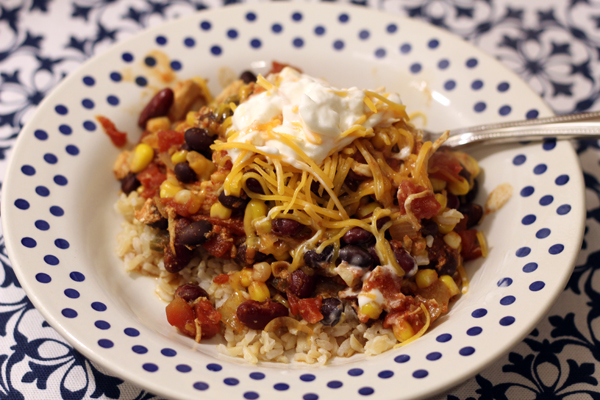 This is one of our favorite things that we make!  It’s seriously SO GOOD.  It’s a crockpot recipe and it’s so easy.  And it’s from Skinnytaste!  Of course, I make it a little worse for you by eating it over brown rice, and topping it with cheese and light sour cream.  I leave out the cilantro just because I don’t care enough to get it at the store.

Thanks for following along!  You can check out Vol. 1 and Vol. 2 for more meals!