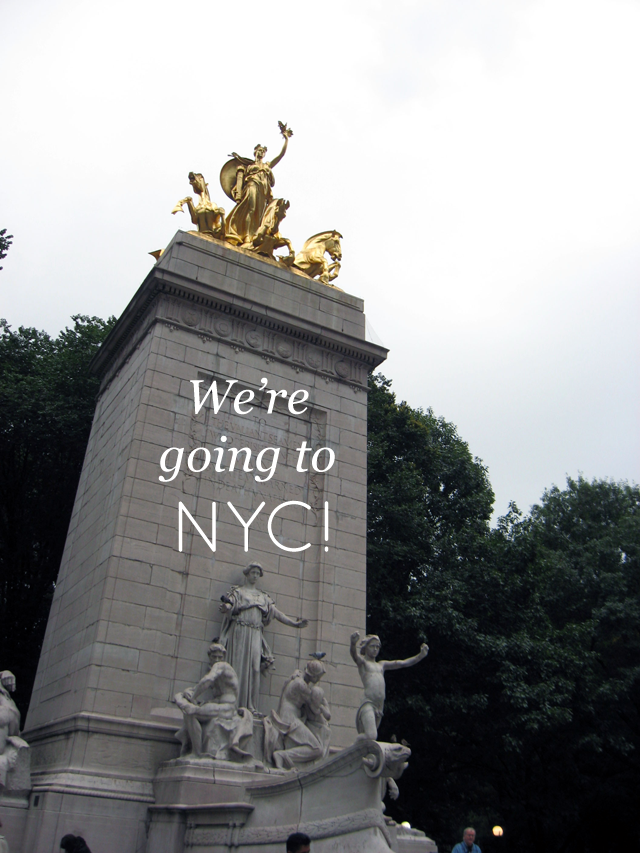 {photo taken by me on this trip, which was one of my first blog posts!}

Eek!  We’re going to NYC towards the end of August, and I couldn’t be more excited!  Our first anniversary is on August 13th, and Brian sweetly suggested that we go to New York.  He’s never been, and I’ve always wanted to go just the two of us.  Well, literally a couple of days after that, Alt NYC was announced.  I didn’t know what to do.  It was so close to being convenient, just 10 days separated our trip.  When Brian got home we quickly talked it over and realized that I should snatch up a ticket, and if we decided that it wasn’t right, I could always sell it later.

Well, it was a good thing I got that ticket, because they sold out in something like 4 hours.  We debated and thought about it for a long time, but in the end we decided to move our trip so that I could go to Alt.

But here’s the thing: we’re not extending our trip.  We’re staying for two nights, which means that the one full day that we’ll be in New York, I’ll be at Alt.  And Brian will be on his own.  In New York.  On his first trip there EVER.

Brian has been a total trooper about the whole thing, ultimately giving up time for us to hang out together for me to go to Alt, which has been a goal of mine.  But because he’s never been and he’s being so accommodating about me turning this trip into a blogger thing, I feel like I need to plan at least a few fun things for him to do by himself on that day that I’m gone.

That’s where you guys come in.  Do you have any ideas?  Any fun things that a guy who is interested in movies and comic books can do by himself in NYC, on the cheap?  I’d also love any other general NYC tips or place that you think we MUST go while we’re there!  You guys are all so awesome- I know you’ll have some cool things to share!

PS. This post about doing things separately on vacation was published around the time we were deciding, which I thought was so funny!  Have you ever done that?  I think it sounds fun!