If you’ve been checking in on social media this week you’ve probably been hearing a lot about the new Vine app that Twitter released recently.  As far as social media goes, it seems to have been a fairly polarizing development- a lot of people have been declaring to be adamantly for it or against it.  I started off being pretty indifferent to it and was leaning towards not joining at all.  I’ve heard from a lot of bloggers that it’s its a good idea to pick 3 social media platforms and be very involved in them, and I still think that’s a good idea.

However, around Sunday afternoon I was getting an itch to see what all the fuss was about- so I caved.  And I’m glad that I did- it’s pretty cool to watch the cool things that people come up with!  But I do think there are some things about it that are not so great, so I thought I’d share my thoughts with you today. 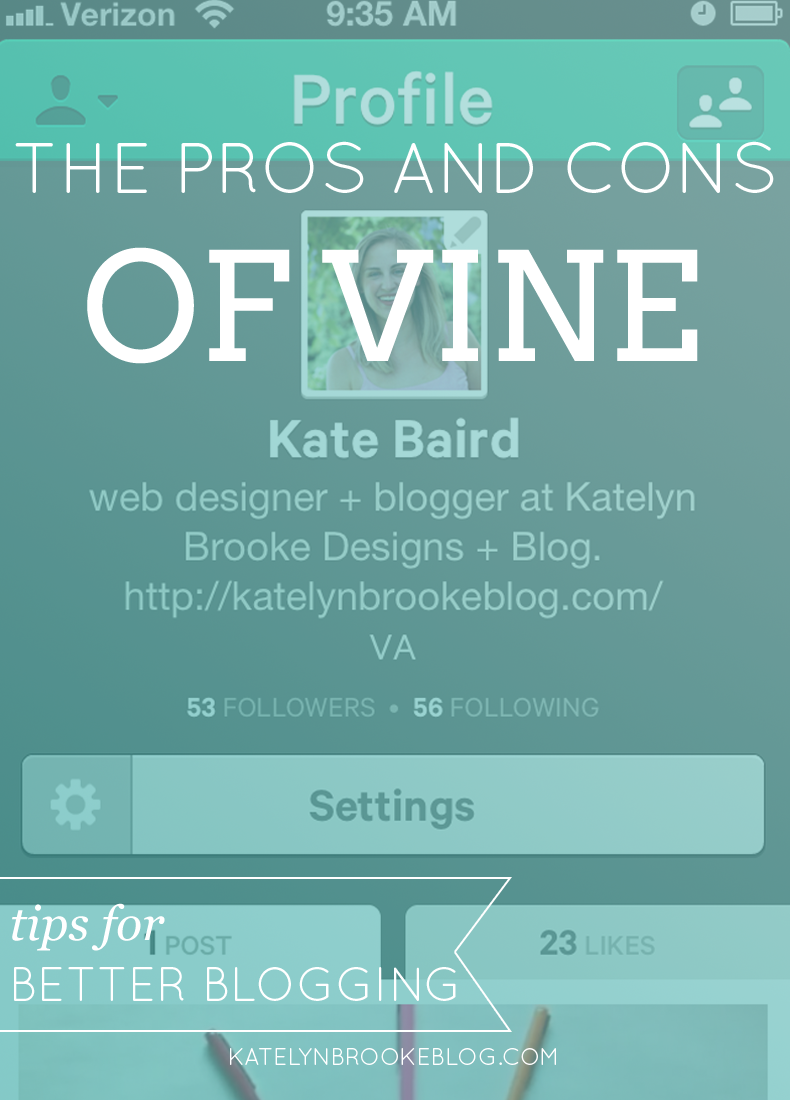 Less stylized.  Unlike Instagram, there aren’t a million and one filters for this (yet?) Don’t get me wrong- I love the artistic and styled aspect of Instagram.  But something about Vine feels more real and less staged, which I think is a cool opportunity for authenticity.

Quick way to put yourself out there.  Your personality really shines through more in a video than a picture.  I’m looking forward to making videos that are funny- or at least show that my sense of humor often involves weird noises and silly faces.  You might not know that from reading my blog.

Captures space well.  Sometimes it’s hard to really get the feel for a space in a photograph- particularly small spaces.  Vine is pretty cool because by virtue of motion it allows you to show more, quicker.  My mom is a realtor and I’m totally signing her up for this- I think that it would be really cool to show little snippets of listings.  It would really help you get a feel for a space quickly.

Shows progression.  Some things are more interesting when you’re tracking your progress.  I’ve been loving all the little stories on Vine- particularly those that involve drawing or illustration (you guys gotta find Joy Laforme on there- so cute!)

Babies and puppies are even cuter in motion.  This is just a fact.

Weird username interface.  Because it’s compatible with Twitter, you’d think that you’d be able to use Twitter handles to tag people or at least find them.  Not the case.  Even though I used my Twitter account to sign up, to find me you have to search “Kate Baird.”  It’s annoying, especially if you want to tag someone in your post.

Only accessible via iPhone.  For some reason they didn’t take the cue from Instagram and make profiles accessible from the web, which makes it tricky to share your profile across other platforms.  And of course- this is iOS exclusive for now, so you’re left out unless you have an iPhone.

Sound.  This can obviously be a good thing too, but sometimes when you’re scrolling through it gets really annoying to hear someone say the exact same thing over and over again every six seconds.  Be aware of how you sound when you’re filming, and remember that less is more when it comes to talking on Vine.

More time sensitive.  I like that you can take a picture and upload it on Instagram whenever you want.  This doesn’t seem to be the case with Vine.

Can get boring quickly.  Because there aren’t any filter options, sometimes the everyday things that would seem artistic on Instagram can just be plain boring after a while on Vine.  And like any social network it’s easy to want to post but not have anything to show (trust me- I’ve taken like 8 of them and only posted 1 so far!)  My strategy is to post sparingly.

Are you on Vine?  What do you think about it?  And if you have any favorite people to follow, let me know in the comments!