In general, I try to steer clear of pet peeve posts.  They tend to get rant-y, and I just don’t love starting off a blog post with a negative spin.  But, in the last few weeks I’ve been thinking about some of the common mistakes that bloggers make.  You see, for a community where pretty much anything goes, we have a lot of rules.  And when you’re new to the game, sometimes it can be hard to navigate these waters.  So let’s look at this post as less of a rant, and more of an educational discussion.

This became really long, so I decided to break it up into more than one post.  Check back next week for the second installment! 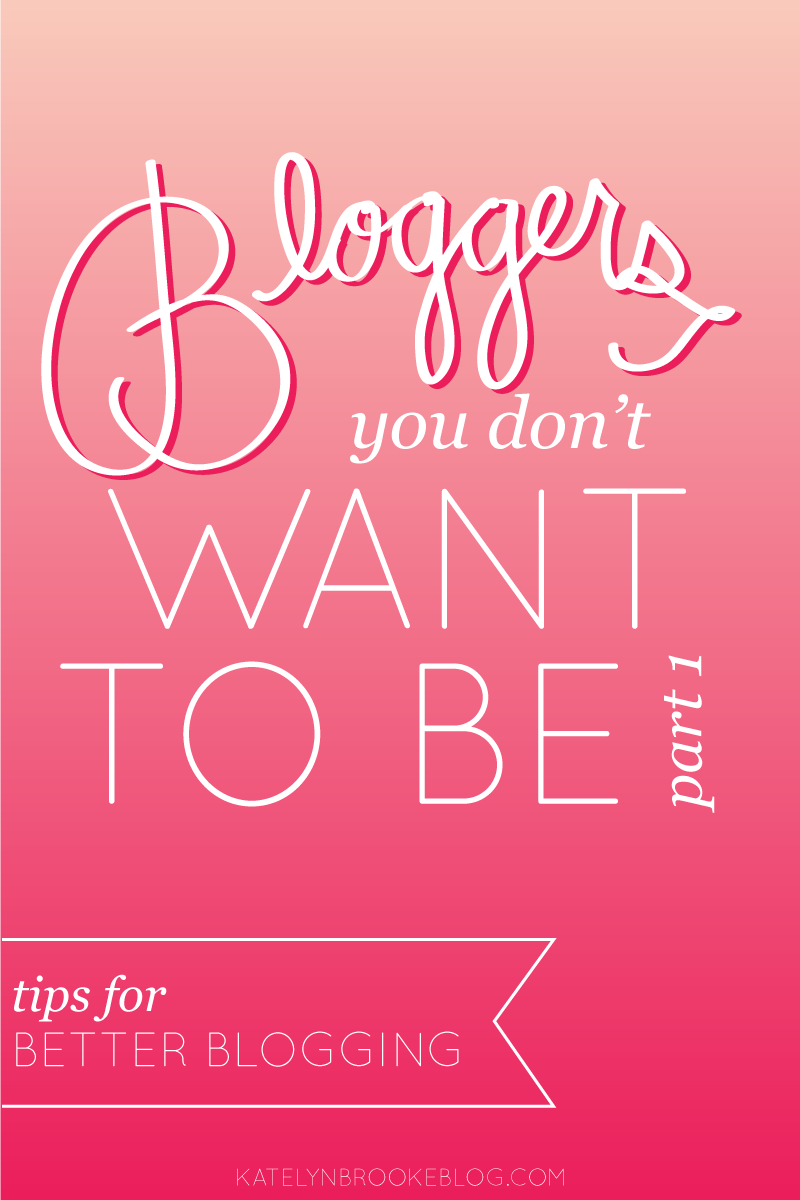 The quickest way to becoming a pariah in blog world is by copying another blogger’s content and claiming it as your own.  Because it’s so easy to make stuff up and post it on the internet, blogs have to be built on a foundation of trust with their readers in order to have any credibility.  It’s pretty easy to irreparably damage that credibility.  The internet makes it really easy to find out if someone is using text or images that they don’t have the rights to, and the blogging community looks at these transgressions as the lowest of the low things that a blogger can do.  Steer clear.

More likely than blatant copying though is when a blogger is a little too inspired by another blogger’s content.  This is admittedly tough because there’s a lot of gray area- how much do you have to change something to make it your own?  When in doubt, share the link to your inspiration with your readers!  By giving a shout-out to the other blogger, you’re giving them the recognition they deserve, and giving your readers something additional to check out if they want more content like what you’re posting.  Just know that sometimes linking isn’t enough, and it’s possible that a blogger that you’re imitating will ask you to remove the content.  Play it safe by running your idea by the other blogger first in an email.

See also: improperly sourcing your images, or even worse, not attempting to source them at all.

Everybody has gotten those “if you follow me, I’ll follow you!”  comments.   This is alienating because blogging isn’t about having a higher follower count- it’s about connecting with others and having people genuinely respond to what you post.  If two people follow each other just so that they can mutually benefit from higher numbers… that kind of defeats the purpose.  The only thing worse than this is just leaving comments asking people to follow you, with no recognition of the blogger or blog that you are commenting on.  Just don’t do it.  (Thanks to Megan for this idea!)

If you’re asking another blogger to do you a favor, first you need to ask yourself if what you’re asking qualifies as a favor or if you’re asking them to give you something they normally charge money for for free.  If it’s the latter, you need to really examine if it’s worth sending that email, because there are very few instances where that is a good idea.

If it is really just a favor, you need to send them a personal email.  Otherwise, it feels like you’re clogging that person’s precious inbox space with something spammy.  Make sure the email is sent to them individually and that their name is correct in the greeting.  Demonstrate that you read their blog in your email.  It wouldn’t hurt to check out this post on asking for a favor.

See also: signing another blogger up for your email newsletter without their permission.

The Buyer of Followers

Let’s be real- it’s hard not to like a well thought out, genuine giveaway.  When a blogger gives away something that they really love in appreciation to their readers, I can get behind that.

But when giveaways start to take up a high percentage of posts and happen on a very regular basis, it starts to feel like the blogger appreciates the potential followers that might find them via the giveaway more than they appreciate their existing followers.  It’s starts to feel less generous and more like you’re trying to buy friends. Just participate sparingly, and try to make sure that the focus is more on appreciation, and less on the number of followers that you’re getting out of the equation- otherwise it feels like a publicity stunt.

A lot of people are charging for ads these days, which is cool with me- blogging takes a lot of time, and I fully support those who are able to make money from their endeavors.  However, when you start charging for ads, you give up the right to pull a certain blogging card.  I’m referring to the “I only blog for me” card, and therefore the ability to post only when you’re feeling inspired.

When you sell an ad to someone, you are agreeing to post in a similar pattern to when the person purchases the ad.  If you post everyday for six months, and then drop off the face of the earth a week after someone purchases the ad, you are essentially not giving them what they paid for.  Most of the time this isn’t discussed when ads are purchased, so this is really an ethical issue over a legal one- just be respectful of the people who want to support you, and make sure that they are getting what they thought they were purchasing when they decided to give you their money.

Thanks to everyone who shared their thoughts about this topic on my Facebook page!  Go check it out, it was a pretty interesting discussion!

« Believe in the Beauty of Your Dreams
Branding: Evergreen Lane Productions »