Ding, ding! We’re back for part two. If you missed last week’s post go check it out- the comments were awesome! 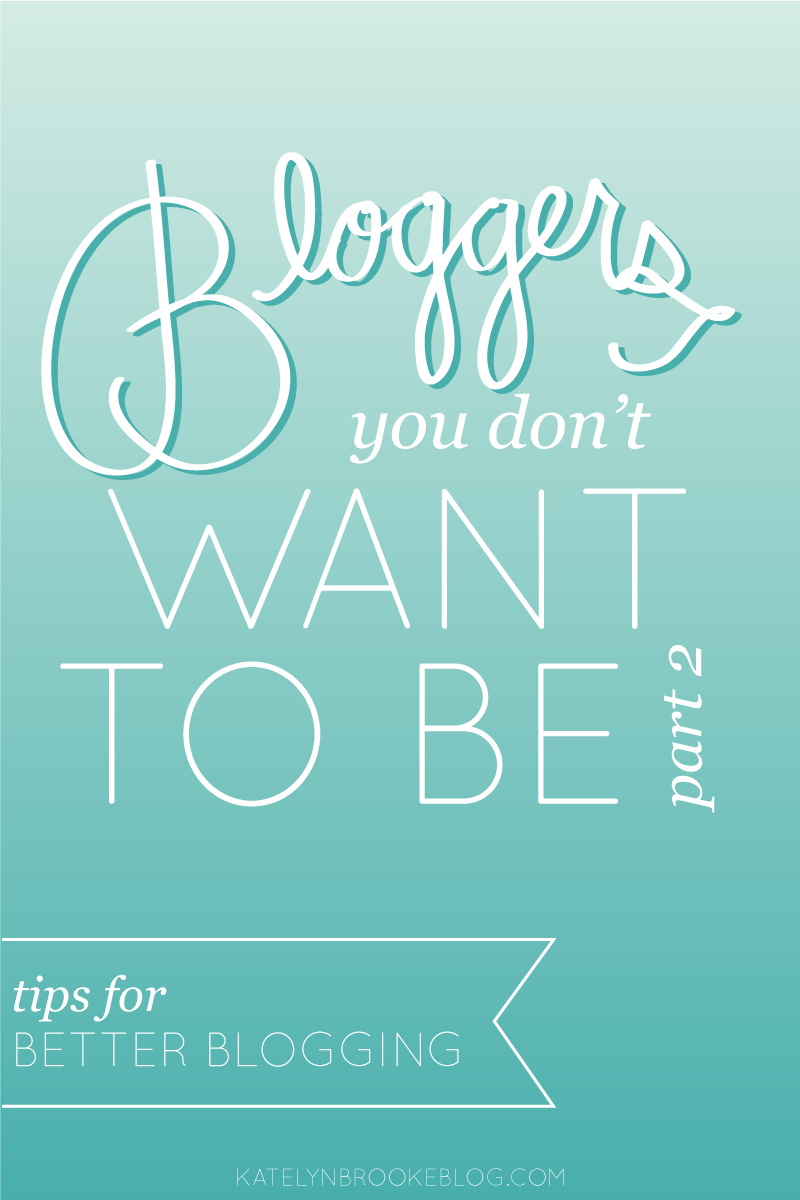 As readers, we want to feel like some of our investment of time and trust in your blog is reciprocated with at least a mild interest. It doesn’t take much to elevate you from recluse status- just be approachable and be willing to engage with people regardless of their “size” in blog world.

Also, make sure you check your @connect page on Twitter! You won’t receive notifications when someone you’re not following tweets you on the basic Twitter interface (one of the reasons I love Tweetdeck!) Make sure you’re not accidentally ignoring people. It’s disappointing to put yourself out there to someone you admire and not get a response.

See also: ignoring certain bloggers. If someone is commenting regularly, make sure you throw them a bone every once in a while. They’ll notice if you repeatedly skip over their comments!

I’m sure you guys see more typos on my blog than I would like you to. But you’d be surprised how many people are really turned off by bad grammar- it was one of the most common complaints mentioned this Facebook discussion. While bloggers of different niches use varying amounts of text in their posts, no matter what it always behooves you to have polished content. At its most basic level, that means good grammar and spelling. It’s okay (in fact, encouraged) to write in your own voice, just make sure that you’re not accidentally breaking any major rules.

A couple of times I’ve been in touch with a blogger and they’ve invited me to do a guest post, I get them the content according to their specifications, and somehow it gets posted way after the fact or it doesn’t get published at all. When this has happened it seemed to be for one of two reasons. The first is that it just got lost. It was a “bigger” blogger, and though they confirmed that they would publish my stuff, I was the one who reached out to them, and once the content was submitted I never heard from them again.

The second reason is that the blogger was kind of using the guest post series as a last ditch effort to reignite their blogging spark, which seemingly went out before the guest post went up. Either way, whatever you do, make sure you publish any content that you have sought out. It just sucks to put time and effort into a post and then feel like your time has been wasted. Even if you never plan to publish another blog post again, make sure that you publish any remaining guest posts and post about them on social media. Once you’ve done what’s expected, you are free to fall of the face of blog world. Just don’t do it before you’ve tied up the loose ends.

See also: sending guest post content late. If you agree to do a guest post, make sure you send it reasonably on time, or at least give notice if you’re going to be late. I’ve been guilty of this a few times, but just make sure that you’re courteous! People are generally understanding.

You know the type- the kind that adamantly proclaims to hate drama when it’s really not necessary to do so. I bet you can think of a few bloggers off the top of your head that seem to surround themselves with unnecessary amounts of drama. Twitter seems to draw the lion’s share of blog world drama- and it’s just not classy to have epic Twitter wars with other bloggers. No matter how much someone rubs you the wrong way, using Twitter or some other public forum to air your grievances is immature and passive aggressive.

The bottom line- don’t publicly talk crap about other bloggers (or privately, if you’re really smart.) The reality is that for the most part, what you say on the internet is forever. It’s hard to take things back. Be courteous and compassionate towards other people- we’re all human beings on the other side of our screens.

Some people are just negative. It comes through in the way that they write, and it seems to transcend the circumstances of their lives. I’m not talking about when bad things happen to you- that happens to everyone at some point or another. I’m talking about when everything that you put online is negative in some way, be it a complaint, a criticism, something self-deprecating, or heck, even a pet peeve post. All of these things are fine in moderation (notice how this kind of is a pet peeve post.) In fact, when bloggers are overly positive it seems inauthentic. Just make sure that you’re aware of the energy that you’re putting out there, you’d be surprised what attitudes can get across online.

See also: being overly vague. Everyone encounters bad times, and sometimes you have to let people know without giving them the details. Just don’t tease your readers too much.

Last week’s discussion was pretty amazing- I’m dying to hear what you guys think of this one! Do you think I forgot anything? And like last week, if you’ve ever written a blogging pet peeve posts or anything like that, I’d love for you to leave the link in the comments!

« Reflect and Move On
Starred this Week »