Alright! If you missed yesterday’s post, check that out first so you know the background behind this little vacay recap. Let’s dive back in! 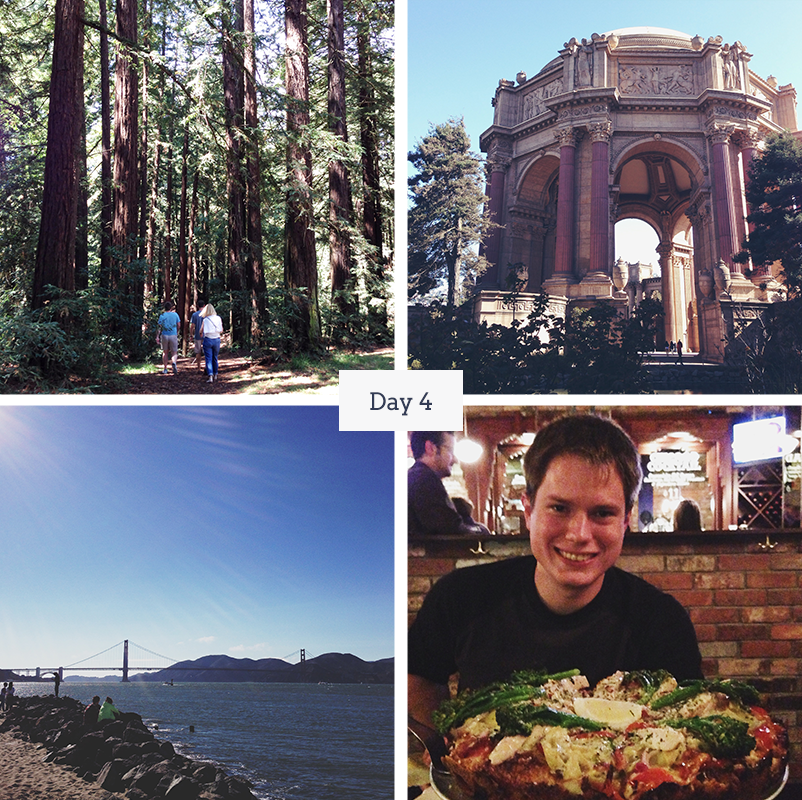 On Wednesday we decided to try again on the whole Redwood Forest thing. I had gone online to see what we had done wrong exactly, and the park’s website had a list of other parks containing redwoods that were supposedly less crowded. One of them was in Oakland, which we were planning to go to anyways. Sold- we’re all about less crowded in my family.

So we all hopped in the car and headed to Redwood Regional Park. We honestly didn’t explore as much as we probably should have, but the drive was really nice and the park was enough to give my nature-lite family their big tree fix.

After that, we headed to Oakland to Fenton’s Creamery. This is a place that my mom has been telling me about for my whole life. My grandfather, an ice cream enthusiast, loved to pile everyone in the car and make the 30 minute drive to get ice cream there. It was cool to finally have a Swiss milk chocolate malt that my mom has always told me about.

Since we were in the area, we decided to check out Berkeley before we headed back into the city. We walked around campus a little and my dad and brother bought some shirts. I made jokes about running into the Bravermans, and we piled back in the van.

We were feeling the pressure to really make the most of the day since we still had a lot to hit up on our list, so we drove from Oakland to the Presidio. I’m so glad we made it here- it’s something we studied in school and I really wanted to see it. We walked from there to the Palace of Fine Arts, which was one of my favorite sites from the trip. It was such a beautiful place, it totally didn’t disappoint. Even though we were all pretty tired at that point, we walked over to Crissy Field and got an amazing view of the Golden Gate Bridge during the golden hour.

August 13th is Brian and my wedding anniversary, so we decided to celebrate by going out to dinner. We Uber’ed (is that a verb?) to Capo’s, a pizza place Brian had found online through his trip research. It was such a cute place, and the food was pretty incredible. We ordered The Dillinger, which has apparently won some awards or something, and even though the toppings weren’t traditional, we were totally sold. We actually at the leftovers for breakfast the next day, and it was pretty baller. 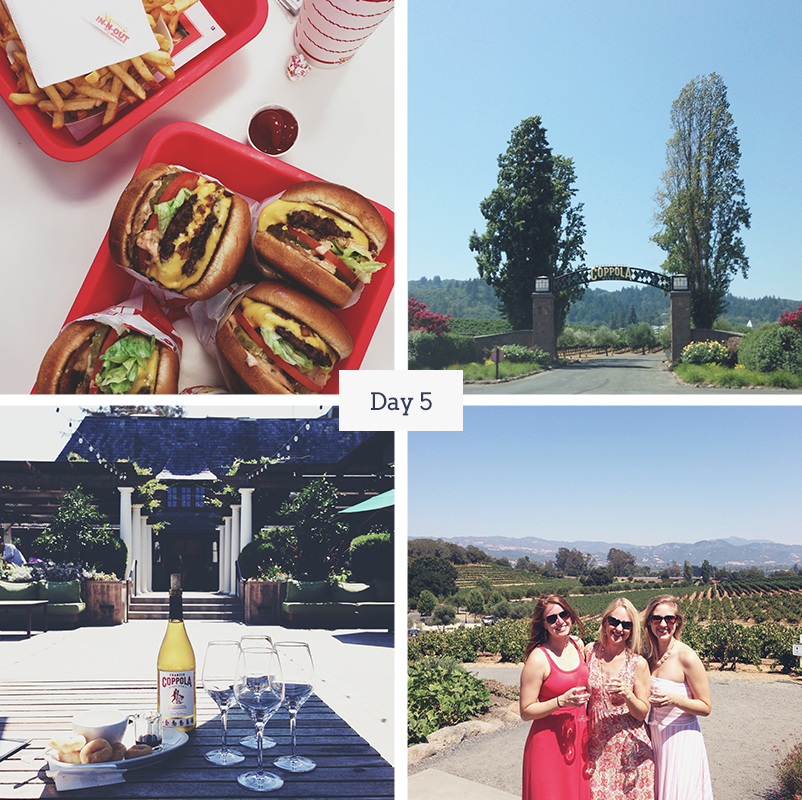 Thursday was my future sister-in-law’s birthday, and we planned to hit up a winery that day. We toiled over several lists of wineries, and finally settled on Coppola. It was amazing. My only regret was that we didn’t bring our suits and spend the whole day by the pool.

On the way there, we were able to hit up In-N-Out, which was another food item on our list. Brian had scoped out the “secret” menu which resulted in a pretty hilarious ordering experience. Overall, we gave the burgers two thumbs up.

On the way home from wine country, we met my dad at Tacolicious for dinner (another idea from Anna.) We were big fans- they did a really awesome job accommodating our big group and handling my dad’s celiac requests. And the pitchers of margaritas didn’t hurt, either.

This was our last and probably most dysfunctional day. Everyone was tired and we were trying to squeeze in some remaining items on our list. We thought the best way to do this was by taking the cable car and bus, but that wound up being somewhat of a frustrating experience. We got kind of a later start, and hopped on a cable car towards the Ferry Building. It was a cool place- my dad got his gluten-free baked goods fix at Mariposa Bakery, and the rest of us at lunch at Boudin across the street.

From there, our goal was Golden Gate Park, although truthfully, we weren’t really sure what we were trying to hit up there. Once we finally got on the bus, we were okay, and we made our way to the Conservatory of Flowers. Most of us felt that the outside was the best part, but they had a meat-eating plant exhibit that Brian was pretty enthusiastic about.

From there, we decided to part ways. Everyone else was ready to go home, but my mom and I wandered around the park because I had scheduled a coffee date with Lauren nearby. We met at La Boulange, which was so cute. I’m so glad we got to meet up, it was definitely the highlight of the last day for me! I’ve known her for most of the time that I’ve been blogging it was so much fun to get to chat. Unfortunately, I was too spaced out to take a picture. What kind of blogger am I, really?

Lauren helped my mom and I navigate our way back to the apartment. Everyone was pretty sluggish and was having trouble figuring out what to eat. My mom was feeling like another Fenton’s fix would be the perfect way to round out the trip, so we piled in the van and headed out to Oakland. It was pretty nuts on a Friday night, but we were all sleepy-drunk and found it wildly amusing to watch these monstrous sundaes melt since the tiny children who ordered them only took 2 bites.

And that was that! We flew out the next day. Thanks for sticking with me, I had fun recapping our adventures! And in case you missed it, here’s the link to part 1.