Happy Valentine’s Day! Today I’m documenting the first part of our journey with our newest family member. We’re due with a baby girl at the beginning of July! I already broke the news on Instagram, but I have been really wanting to document more of my pregnancy and for some reason analog isn’t really cutting it for me lately (I can’t seem to read a book or write in a journal to save my life.) So here I am! 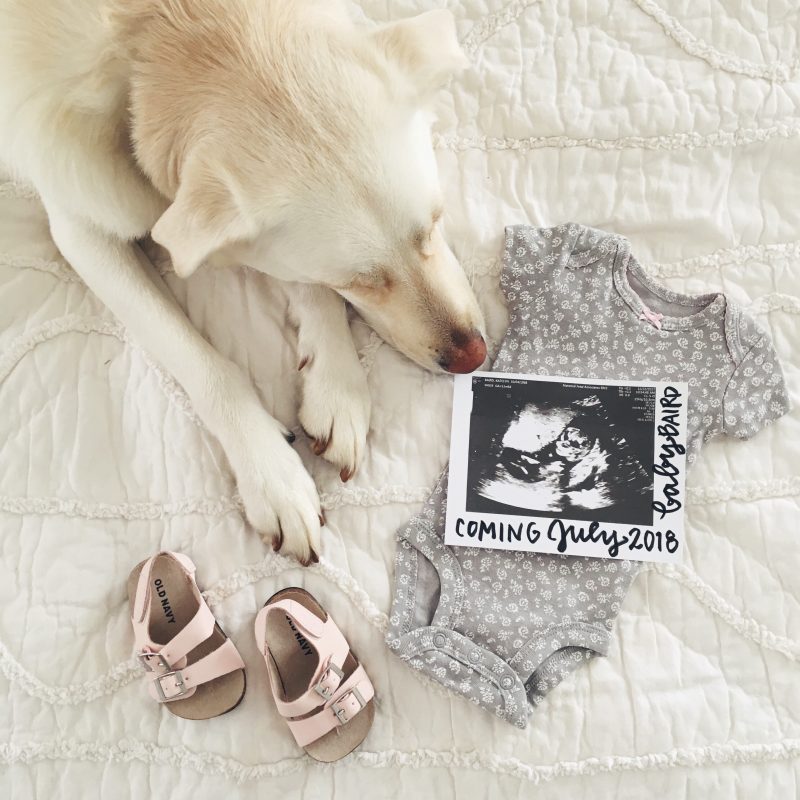 As I’m posting this I’m in the middle of week 19. I’m feeling a lot better! Still not 100% rid of the nausea, but it’s manageable right now. The first trimester was really rough so a lot of this post reads somewhat negatively. It’s silly how guilty that makes me feel! And it makes me realize why so much of this came as a surprise – I felt like I should have been way more prepared for pregnancy than most based on how many mommy blogs I’ve read over the years. But truthfully, I was not AT ALL prepared for how hard it is to be pregnant. And I’m guessing a lot of that is because women feel bad focusing on the bad parts of pregnancy. So here are my notes from the first trimester, the good and the bad.

4 weeks: surprise! We’re pregnant. And it was truly a surprise – we had planned to start trying a few months later, but things turned out a little differently than we’d planned! We were both thrilled and I was pretty nervous.

5 weeks: one day I went to the grocery store and bought ALL the root vegetables. The next day I started to not feel so good… I proceeded to not be able to look at the squash that I’d bought and continued to be turned off to all that stuff for weeks. I started feeling nauseous every day, usually starting between breakfast and lunch and continuing until I went to sleep anytime I hadn’t eaten within 10 minutes.

6 weeks: had our first doctor’s appointment! Overall pretty anticlimactic, but we told our parents after we got the official confirmation (well, I told my mom the day after we found out – we work together, it was too hard to keep it a secret!)

7 weeks: first ultrasound, got to see the baby’s heartbeat! It was such a relief as I’d been worrying a lot, and such a surreal moment to see that little nugget in there! And there’s definitely only one baby in there! For some reason I really thought we might be having twins at the beginning.

11 weeks: we had our ultrasound screening at a more high-tech facility. It took forever because the baby wasn’t very cooperative getting in the right position, but it meant that we had 45 minutes of getting to watch her (didn’t know that at the time!) move around. So crazy the difference a few weeks can make, we got to see the baby move and wiggle around and it started to really sink in that we were looking at our baby in there!

12 weeks: we decided to wait to tell our extended family so that we could tell them at Christmas. This was also the time period that a lot of people told me most women start to feel better. We announced our news to my mom’s side of the family on the 23rd, but morning sickness took care of the rest of the plans. On Christmas Day I made it to brunch at my parents but spent the rest of the day on the couch. I threw up for the first time (MERRRRY CHRISTMAS!) and proceeded to get sick many nights that week. I had horrible indigestion and was generally miserable. This was definitely a low point for me. I could not have been more excited to say goodbye to the first trimester!

Thanks for reading this if you got to the end, I’m excited to share more of this journey on here as it unfolds!